1. The development history and application potential of LED. Since its birth, the "Haitz" law has rapidly developed with the brightness increasing by 30 times every 10 years and the price dropping by 10 times. Ordinary high-brightness white LEDs have reached 100 lm / W in the laboratory, and 50 lm / W high-power white LEDs have also been commercialized. In terms of monochromatic light, the light effects of red light, yellow light, blue light, and green light are constantly being refreshed. LEDs are becoming more and more widely used as new light sources, and have gradually attracted more people's attention and expectations.

At present, LED applications are diversified and distributed in various industries, including indication, display, backlight, and lighting. Lighting is the industry with the most potential in many LED applications. With the continuous improvement of LED light efficiency and the continuous reduction of costs, its market in the entire lighting field will also be expanding. Following the "Next Generation Lighting Project" of the United States, the "21st Century Lighting Project" of Japan, the "Rainbow Project" of the European Union and the "Solid State Lighting Project" of South Korea, in 2003, China established the National Semiconductor Lighting Engineering Group to integrate resources, Rapidly promote LED to enter the lighting market. According to the prediction of Academician Chen Lianghui of the Chinese Academy of Engineering, China's semiconductor lighting can save 400 billion kWh from 2005 to 2015, saving 260 billion yuan in electricity costs for users, creating 150 billion yuan in output value, and solving the employment of 1 million people. 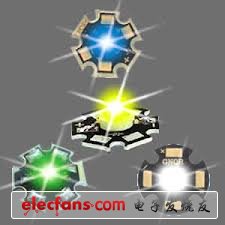 At that time, the annual energy saving of semiconductor lighting will exceed the "Big Mac"-the annual power generation of the Three Gorges Power Station! In the context of increasing energy shortages, the use of LED energy-saving features, the development of LED lighting is a positive response to the government's proposal to build a conservation-minded society.

Second, the characteristics of high-power LED and compared with other light sources LED is well-known as "green light source". In the lighting industry, comparing it with traditional light sources, it shows some advantages that are difficult to replace: LED as a light source for lighting has the following advantages:

2. Long lifespan: the product lifespan is up to 50,000 hours, 24 hours continuous lighting can be used for 7 years;

3. The dynamic control of brightness and color is easy: the brightness can be continuously adjusted, the color purity is high, and the dynamic color conversion and digital control can be realized;

4. Flexible shape and size: it can achieve organic integration with the building to achieve the effect of seeing the light but not the light;

6. Color: bright and saturated, pure, no need of filter, red, green and blue elements can be adjusted to various colors, which can achieve variable, progressive, mixed light effects, excellent color rendering effect. With so many advantages in one, it makes us feel that it is a valuable work to promote the use of LED.

However, compared with other light sources, LEDs also have shortcomings, such as low color rendering in white lighting. At present, the color rendering index of white LEDs produced with yellow phosphor and blue light is about 80. It can be used as general lighting, but it is insufficient for some places with high color resolution requirements. Although the color rendering index can be increased to 90 or higher by adding appropriate red phosphors and other methods, there is still a certain gap compared with 99 for incandescent lamps, and its efficiency will be affected. The color rendering can also be improved through RGB color mixing, but more work needs to be done on the popularization and application of technology, so LED color rendering needs to be improved. As for the price is too high and the one-time investment is relatively large, in fact, considering the comprehensive cost, the use of LED in many occasions still saves a lot of cost.