Skip to content
â€œThe test results of the major performance indicators such as color, brightness, and sound quality of the tested products are much higher than the average level of the industry.â€ June 22, Beijing Tairuite Testing Technology Service Co., Ltd. (National Radio and TV Product Quality Supervision and Inspection Center) Thailand One of the authoritative conclusions of Reiter's research is enough to make the Chinese television industry and even the entire Chinese industry boiling.

This conclusion is based on the rigorous testing of the TCL QUHD Quantum Dot TV flagship product. On the same day, as the only domestic digital TV product user-end testing laboratory Territor, launched a "good technology, not afraid to see" quantum dot TV big detection action, ushered in by the authority of experts, color masters, science and technology, media, The observation team composed of reporters and core users witnessed the entire process and ensured the openness, transparency, and fairness of the test. It is reported that this is the first time that the company has been open to the public since its inception. It is of great practical significance for the popularization of high-tech television in the TV industry. Faced with the most rigorous testing ever, TCL will face challenges with an open attitude. The first time that TCL will conduct the entire inspection is to let the public feel the charm of technology from a distance. 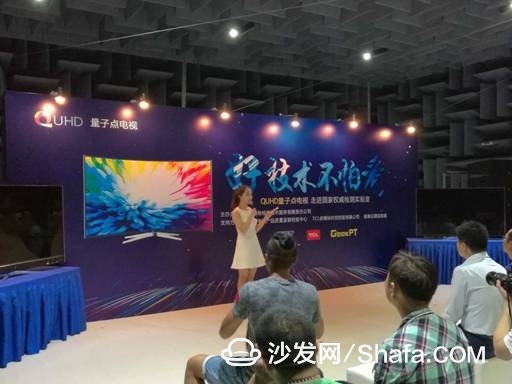 "Good technology, we are not afraid of everyone to compare and test." At the event, Guo Ting, general manager of Beijing TCL Electronics Sales Co., Ltd., has full confidence in testing. Although it is a full-spectrum, professional detection of live ammunition, QUHD QD TV is the first to take the lead. With the integration of the highest technology, TCL has been successful in this challenge. The final test results show that the core indexes of the tested QUHD products are disdain for the whole industry, especially the color gamut coverage (DCI-P3) is the highest value in the large database, the peak brightness exceeds the industry average of 77.9%, and the color brightness exceeds the industry average. %, acoustic frequency response exceeds 97% of the industry's products. â€œIn the history of the global television industry, the history of the Japanese and South Korean companies has always been in a leading position. QUHD has reversed this trend and it is significant.â€ Industry observers pointed out that the test results show that this is the first time China has led the world in television technology. It greatly boosted the confidence of the Chinese people in China's top manufacturing and led the TV industry to rapidly transform toward the next generation of high technology.

It is understood that Territt has come a long way. It is affiliated with the Third Institute of China Electronics Technology Group Corporation and has a state-level digital TV product testing laboratory. It is also the earliest company to conduct full-performance testing of electronic information products and domestic and international product certification testing. The organization has the first batch of CCC certification testing laboratories in China. According to industry experts, CCC certification is China's mandatory product certification system, TV products must pass the CCC certification before they can be manufactured sales, Territt's industry status and technical strength is evident. At the same time, this institution is also the earliest domestic technical team consisting of world-class testing equipment and a group of special allowances from the State Council. It drafted more than 200 national and industrial standards and obtained a number of national and ministerial technical achievements.

"The tested QUHD products are subjected to unprecedented strict authoritative inspections." Wu Rui, general manager of Tairuite, said at the event site that the test was objective and subjective and that the test was conducted under the full witness of the observer mission. Ritter's research has been publicly tested for the first time in history, and it has been highly valued, investing in the most professional and leading equipment and personnel participation. 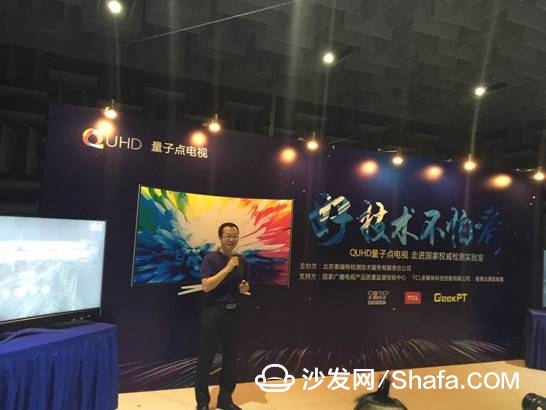 Tairui Wu, General Manager
Wu Yan introduced: "As the national quality supervision and spot checks, the national industry standards for the development of the undertaking unit, and television products CCC certification testing agencies, Territte brings together a large number of television industry test indicators and data, which built the industry-leading Large database, through large databases, Territt research can conduct comprehensive and accurate comparison and analysis of the overall performance of TV products and specific individual technical performances.â€ In the face of such authoritative big data, there is no firm that has challenges, but this time QUHD is destined to create history.


"Tested QUHD products are one of the best TVs in the market for color test indicators," said Terry Yudi, Research Manager at Territt. QUHD uses quantum dot display technology to bring television into the era of wide color gamut. According to the Terrett test report, the color gamut coverage (DCI-P3) of the tested QUHD products is the highest value in the large database, which is higher than the average gamut coverage of OLED products. At the same time, the tested QUHD products were 109% in color brightness, ranking first in the entire large database, 8.6% higher than the second.

"A higher brightness can better restore the real world scene. The peak brightness of the tested QUHD products reaches a maximum of 1,630 cd/m2, which surpasses the testing index of all products in the large database." According to Xie Yudi, he revealed. In general, the large database average of each indicator represents the overall level of the current industry products. The tested data of QUHD products exceed 77.9% of the average database size of 916 cd/m2 for the same type of products. Because of the difference in reality, LCD TVs are more likely to achieve higher peak brightness and are therefore higher than the average brightness of OLED TVs. 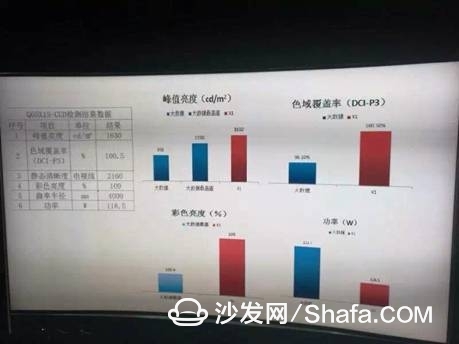 Excellent audio and video skills! QUHD conquer technology geek elite
â€œThe sound quality of the tested QUHD products is very good for each test,â€ said Xu Yongsheng, director of the Terrett Acoustics Department and senior engineer. According to the television industry standard SJ/T 11343-2015, the frequency response range of the television is required to be better than 200 to 6300 Hz, while the QUHD is equipped with a Harman Kardon audio, and the frequency response of the audio signal reaches the frequency range of 60 to 20000 Hz, much higher than the industry standard. Exceed 97% of products in large databases. At the same time, QUHD minimum source EMF output sound pressure level is 91dB, ranking first in the large database; sound channel noise level is 19dB (A). In addition, the total harmonic distortion of the QUHD is 3%, which is far below the level of the parameter of â‰¤10% in the industry standard, and is ranked first in the large database. 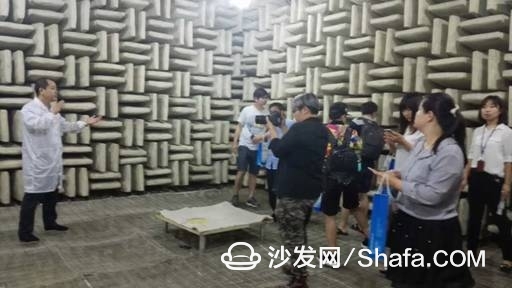 "The Quietest Place on Earth" - Anechoic Room
Into the most exciting scene of the lab activities, challenger Cui Lili from the most powerful brain gray project, the scene singled QUHD. As a high-energy eye-catching challenger who has super power in color recognition, Cui Lili is undoubtedly the best â€œtouchstoneâ€ for TV color expression. Cui Lili challenged the â€œ51-degree grey contrast testâ€ and conducted it in the form of blind test on QUHD and ordinary TV respectively. Only the TV with the best performance can satisfy Cui Liliâ€™s â€œdevil eyeâ€. However, due to the disparate display performance of the two TV gray-scale displays, Cui Liliâ€™s challenge results are also in a world of difference â€“ challenging the success in QUHD and failing in the challenge of ordinary TV. 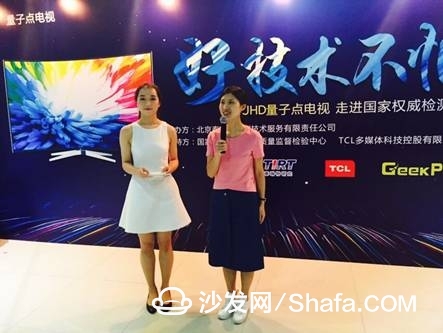 The most powerful brain Cui Lili 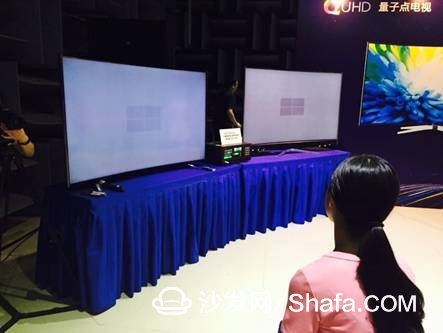 Cui Lili conducts "51 degree gray contrast test" on site
For such a result, the science and technology of millions of people witnessed throughout the process itkiller-McKe believes that this is not a question of the player's ability to identify grayscales, but because ordinary TVs have limited grayscale display capabilities, it is impossible to accurately restore every gray level. Causes the naked eye not to see the slight differences between them. And QUHD has far more than ordinary TV's ability to restore, so that the naked eye can see more details. Cui Lili also believes: â€œQUHD's color performance is perfect, and the precision and purity of color reproduction is far better than ordinary TV.â€


"I have never seen such a vivid picture after I have been dealing with video for more than 10 years!" said the Orange, a photographer and Sina blogger whose name is Sina Bobo. They can say that they have read the beauty and beauty of the world and are very good at the picture quality. Sensitive and demanding, but also dumped for the quality of QUHD. At the scene, there are still the ultimate masters of digital products, senior photographers who are very sensitive to picture quality, and music critics who have very high requirements for sound quality. They all have consistent high praise, and their evaluation of picture quality and sound quality is higher than that of OLED TVs. , QUHD left them with the top product image.

QUHD Quantum TV achieves a 360-degree lead and the overall quality greatly exceeds the industry's products. Each detail of QUHD is constantly improving. Whether it is timber or design, or all kinds of technologies, it is the best of the moment, and it has achieved the all-round leading of the whole machine. It can be called the best product of the Chinese TV industry for 35 years.

Xie Yudi mentioned that the tested QUHD products used Local Dimming backlight partition technology to achieve the industry's highest 288 division, but also improve backlight efficiency and reduce energy consumption. At the same time, the tested QUHD products have revolutionized the use of OD 8mm display solutions, which are far smaller than ordinary TV OD 10-20mm. It is the thinnest HDR local dimming TV in the industry. At the same time, QUHD's first-ever brilliant image quality processing engine is TCL's truly patented product, which improves image quality in terms of color gamut, brightness, and stability. The effect is more plentiful and delicate, and it is an epoch-making image quality improvement. technology.

â€œThis test shows that TCLâ€™s self-confidence in the future display technology disputes has enabled Quantum TVs headed by QUHD to enter the hearts of people.â€ Industry observers admired that â€œunclearâ€ Quantum TVs passed the test. No longer mysterious, the concept of "best TV" began to be visualized, and it also proved TCL's vision of quantum dot display layout.

"QUHD has built new confidence and rising potential for Chinese manufacturing." Observers believe that the public has not known much about quantum dot TV earlier. The QHD has conquered the authority inspection agencies and demonstrated the technological advantages of QD TV's leading generation. Advance experience will surely accelerate the landing of cutting-edge quantum dots and help Chinese companies to seize the power of global television. "Even products that are stunned by authoritative inspection agencies are more likely to win the hearts and minds of ordinary consumers. The prospects for QUHD Quantum Dot TV are extremely promising."

Too hot in summer, how to cool? Rechargeable Mini Fan can help you. When in office, put a Mini Fan on the desk. It will bring you cool and gentle wind. With low noise, other workmates will be nod disturbed. At home, put a portable mini fan on the table, it will bring gentle wind to the children and the elder.

Strong wind and no noise: The mini portable Handheld Fan uses a brushless DC motor to provide strong wind while quiet, energy-saving and stable operation. The maximum rotating speed of the fan is about 4850 rpm which is enough to keep you cool, works by accelerating airflow, low noise, giving you a cool and wonderful summer.

With a USB line, this Usb Mini Fan can be recharged by direct current or a computer. It is also a mobile phone holder when put on the table. Small body, low noise, enjoy the cool and comfortable summer at anytime and anywhere.

By the way, this mini fan is also an aromatherapy. You can add the perfume you like.